Each year the University of Georgia honors veterans at a game closest to Veterans Day by acknowledging the contributions and sacrifices of our nation's military.  In 2013 the Wilbanks Foundation formed a partnership with UGA to bring one of our Medal of Honor recipients to the game.

In 2013 we arranged for Colonel Joe Jackson to attend the game and to be recognized on the field before the crowd.  Colonel Jackson was appropriately greeted with a standing ovation from all 93,000 fans. 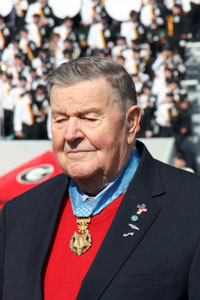 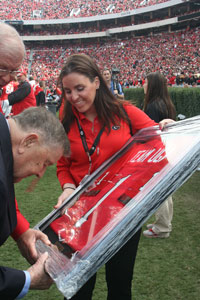 As a veteran of World War II, the Korean War, and the Vietnam War, Colonel Jackson is an outstanding representative for our military.  He works tirelessly to promote our military and specifically the Medal of Honor and its significance for our nation.

Colonel Jackson was also presented with his own jersey identifying him as a number one Georgia Bulldog.

Joe Madison Jackson was born in Newnan, Coweta County, Georgia on March 14, 1923.  As a young man he developed an interest in model aircraft which led to his enlistment in the Army Air Corps at age 18.

Just nine months after his enlistment World War II started and he was assigned to serve aboard a B-25 bomber as its crew chief.  After serving as the crew chief he entered Aviation Cadet training and became a commissioned officer.  During World War II he gained experience in many different aircraft, but by the end of the war he was a B-24 bomber pilot.

During the Korean War he flew over 100 combat missions in an F-84 Thunderjet fighter.  In addition to his Korean War experience he made a number of important contributions to U. S. aviation including:

During the Vietnam War Jackson was assigned to fly the C-123 Provider over South Vietnam. He flew 298 combat missions during this period, but it was his rescue mission on May 12, 1968 during the Battle of Kham Duc that earned him the nation's highest award for military valor.

You can read the details of Colonel Jackson's heroism here.